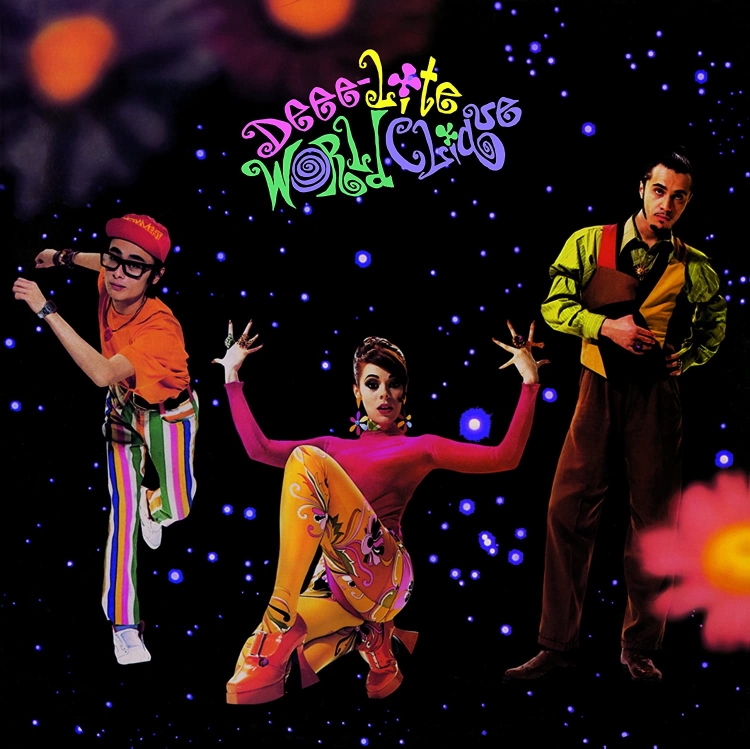 Despite the fact that I own two of their CD’s, I don’t think I’ve actually listened to either of them in over a decade. Well that’s about to change! Let’s see what else on World Clique is worth a listen.

I am fascinated that a song I associate so closely with my high school/university years could be on an album I’ve never thought about. “Groove Is In the Heart” is on my personal playlist and I’ve never searched for another Deee-Lite song.

I’m looking forward to this album and honestly believe that I’ll find some buried treasure. The songs aren’t crazy long (unlike some of the albums we’ve listened to), but I feel like even if they are they’ll be fun.

The icing on the cake

Feels like the only traditional song on the album – a chorus, verses, lyrics, a narrative. Add in some nifty guitar work, a solid bassline and a terrific funky breakdown in the middle and you’ve got my favourite other song on the album.

Great intro, I hope this carries. This is a pretty fun song, and great music. The lyrics aren’t irritating me, and they’re playing around vocally which is what I expected from Deee-Lite. There’s lots of unexpected stuff in this song and I like that. I don’t know that I would have this on my playlist, but I liked it. Eating chips at the end? I don’t get it, but I think it’s funny.

15 seconds in, and I’m bopping along with the beat. Very simple lyrics, it’s really just an intro, but the music is upbeat and great.

This is a great album opener – it does a perfect job of setting the tone. It sports a delightful groove, a solid beat and a fun little horn loop. There are quite a few layers to enjoy here – they create a very dense soundscape. Full of lots of neat stereo effects, I enjoyed this one more than I anticipated.

15 seconds in, and I’m bopping along with the beat. Very simple lyrics, it’s really just an intro, I have very few notes for this one because I was enjoying it all the way though. It’s a great headphone song, with lots of layers, some cool panning, and some well mastered, crisp sounds. I really dig the construction of this one. Enjoyed the listen.

Good. A real techno feel to this, and I was maybe a lot into techno for a while there. I like the playfulness in this song. Interesting that it uses the same sample as in the big hit, and it uses it pretty effectively. I don’t know that this would go into heavy rotation for me, but I like it. First song on the album to feature a different voice, even if it’s just a sample.

A nicely constructed song – I enjoy the bouncy, everpresent bass. This may sound odd, but I prefer The Lady Miss Kier Kirby’s spoken parts to her singing ones. It’s not that her voice is bad – it’s not. It’s just that when her voice isn’t carrying the melody, the arrangements seem to give Super DJ Dmitry and Jungle DJ Towa Towa more room to play with other layers / instruments, and I enjoy that more.

Again, funky and I liked the sampling. By this point in the album I was just happy that she was doing something different with her voice.

Ooooh, Pump Up the Volume chimes! Those are almost worth a point, all on their own. It’s a fun little club song – reminiscent of Black Box in places. I can see this living on a background party playlist.

This is a great dance song. Heavy beat but full of energy. I easily imagine this playing in clubs in the 90’s. I enjoyed it, but not enough to make my list.

Hmmm… I didn’t care for this song as much. The underlying music is pretty good and goes in some unexpected directions, but the lyrics didn’t quite fit for me. That’s definitely the piano used in Good Vibrations.

This was one of my least favorite tracks. My notes call it out for a lack of depth and for having a soft beat. Yeah, that’s right. I said it.

Coming on the heels of reviewing Vanilla Ice, this was a delight. Everything, they say, is relative. I had a bit of internal debate surrounding which songs would make the cut, but I’m pretty happy with my choices.

This album is definitely of its time, for better or for worse. If you dislike early 90’s house / club music, you will dislike this. “Groove is in the Heart” is by far the standout track, but if there’s even a little love in your heart for this style, there’s material to enjoy on here.

I liked the album, but I didn’t love the album.

It wasn’t exactly what I thought it was going to be, but it also explains why there were no other mega hits off this album. I didn’t have a 5 point song on the album, and I may have been a little too strong with my scale at 4 points.

“Groove is in the Heart” just has all the best elements of all the other songs – upbeat, peppy dance music, with nonsense lyrics and a really unique vocal style playing off against a more traditional vocalist. I was expecting the rest of the album to also have these things together, but it was more like having a bowl of ice cream, a bowl of chocolate sauce, and a bowl of whip cream vs an ice cream sundae. They aren’t as enjoyable separately as they are together in the right amounts.

Overall, I really enjoyed the music and the production value. I was bopping along to almost the entire album, which I think means it worked on some level.

Down the Rabbit Hole (Additional listening inspired by listening to this album.)

M/A/R/R/S – “Pump Up the Volume” – featured as sample on the album, this would qualify as a OHW of its own, if it met our guidelines. There’s no album. There’s no discography. This song (and it’s 7”, 12”, US, UK, etc. mixes) is the entirety of this “band’s” work. And I love it. Young teenager me had never heard anything like this, and he wanted more.

Q-Tip – “Vivrant Thing”/”Breathe and Stop” – Don’t make me choose. These are the highlights of Q-Tip’s solo work, in my humble opinion. If your head isn’t bobbin’, listening to these, check your pulse. He’s here courtesy of his appearance on “Groove is in the Heart”.

Parliament – “Give Up The Funk (Tear The Roof Off The Sucker) – Bootsy Collins contributed to a few songs on World Clique. He also co-wrote and played on this classic. It’s definitive Parliament and as a result, it’s definitive funk.

I feel like if they ever met at a party, everyone would have been like “Hey you guys are both weird and fun, you should totally hang out!” And they’d all be like “Oh, yeah, for sure” and exchange numbers but then never actually do it.